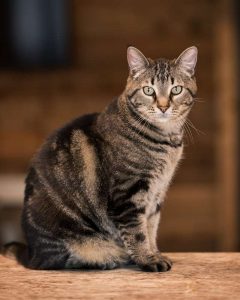 In 2010, badly Injured and scared, tiny baby Simon was rescued from the middle of a busy intersection.

Once his injuries healed Simon began his career at the Morgan Nick Foundation and became a snuggle-bug by day, and a Super-Secret Ninja Kitty by night.

You can follow Simon on Facebook @ Simon The Office Cat, where his bio states: ‘He staples bad guys to the wall at night while the city sleeps…’